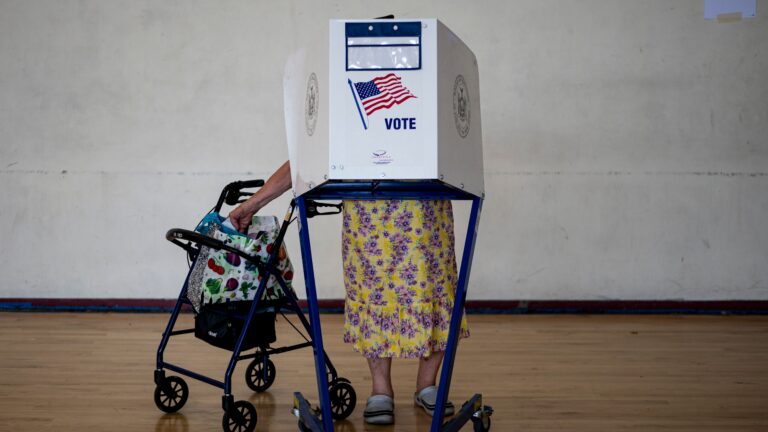 For decades, the disability advocacy community has fought for a permanent — and prominent — place in the mainstream political discussion. The 2020 presidential race has seen a sea change.

Advocates gained new traction during the campaign, pushing the full slate of Democratic candidates to discuss and define their stances on disability policies like never before. Amid social media pressure from activists, former Vice President Joe Biden, now the presumptive Democratic nominee, put out a full disability platform in May. Advocates say the platform — while not as comprehensive as they had hoped — marks a moment of significant progress after years of disability policy being treated as a political afterthought.

“To watch the shift from us having to beg candidates — like literally beg candidates — to include the word ‘disability’ as they rattled off diversity categories to [them] coming to us to say, ‘I want to engage with your folks’ … [this] was such a powerful shift,” said Rebecca Cokley, founder and director of the Disability Justice Initiative at the Center for American Progress, a progressive policy think tank.

There are clear signs of progress. Nearly every presidential campaign approached the Disability Justice Initiative to workshop their platforms — including those for nominee Biden, Sens. Kamala Harris, Elizabeth Warren, Cory Booker, and Kirsten Gillibrand, as well as for Pete Buttigieg, Julián Castro, and Gov. Jay Inslee.

“Throughout the primary we saw a robust and unprecedented policy conversation surrounding the lives and civil rights of people with disabilities…. This is thanks to the tireless work of folks in the community advocating for representation,” said Molly Doris-Pierce, Biden’s national disability engagement director. “I am delighted that the Vice President has engaged people with disabilities in his campaign and cannot wait for him to continue to do so in his presidency.”

But some advocates argue Biden’s commitments, while encouraging, still fall far short and are not nearly as groundbreaking as the plans laid out by some of his former opponents.

“Sanders or Warren’s disability plans would have been revolutionary, whereas Biden’s is evolutionary,” Andrew Pulrang, a disability activist, wrote in an email to STAT. “But evolution is good, and in disability policy, it’s often a lot slower and unimpressive as this.”

Unlike Biden, President Trump does not have a specific platform for people with disabilities listed on his website.

Trump has also drawn the ire of many in the disability advocacy community during his presidency by, among other moves, working to cut Medicaid. The public program is the main source of health insurance for people with disabilities, making it a service “our community really fundamentally depends on for survival,” Cokley said.

A 2017 bill poised to slash Medicaid coverage — which was introduced by GOP lawmakers and which Trump supported — became a flashpoint for many in the community. Advocates came out in force to protest the proposal on Capitol Hill, and dozens even staged a “die-in” at the door of Senate Majority Leader Mitch Mconnell’s office. In widely publicized photos, security forcibly arrested many of these protesters, dragging some from their wheelchairs.

“I think the increased media attention on those protests definitely shaped how the emerging field of candidates … treated the disability community,” Cokley said. “We saw a shift in the power dynamic. It went from candidates treating disabled people like a photo op — almost like a puppy — to actively treating us as engaged voters and stakeholders.”

Cokley said that social media also “blew open the doors” for community activism and coordination. In particular, the nonpartisan #CripTheVote hashtag has given people with disabilities, who account for 20% of the U.S. population, a way to unite and amplify the power of their voting bloc. Disability advocate Tiara Mercius described #CripTheVote — launched by disability activists Alice Wong, Gregg Beratan, and Andrew Pulrang in 2016 — as a “virtual coffee shop” for people with disabilities to discuss what they want out of elected officials.

Cokley said that nearly all the candidates with whom she consulted told her they had staff assigned to monitor the hashtag #CripTheVote. Taking advantage of this attention from campaigns — as well as their wide reach on Twitter — the movement’s co-founders put out an open invitation for presidential candidates or President Trump to join them in a live Twitter chat. Warren and Buttigeg both took them up on the offer.

“It was the engagement our community has always asked for. To not only have major party candidates engage the disability community directly, but to hear them recognize what disabled people have been saying for ages, that ‘all issues are disability issues,’ was a powerful moment for many,” Beratan, who was one of the founders, wrote in an email to STAT.

“It showed candidates were no longer treating disability as a box to be ticked, but that we were a constituency that like everyone else deserved a place at the table,” he added.

Disability advocates and organizations came to play an influential role in helping craft the policies of candidates during the Democratic primaries.

“I think that it’s clear that somebody with a disability had a hand in helping to craft policies this season, because you can see just how specific it is,” Mercius said. The plans, by and large, were far more detailed than the “generic” policies from 2016 candidates, she added.

Biden introduced his plan relatively late compared to other candidates, Cokley said, which meant he had time to glean insight from other platforms. She and other activists were particularly encouraged to see that he — like a number of others in the Democratic field — pledged to eliminate what’s known as “the marriage penalty,” which causes people with disabilities to lose access to health care benefits when they get married because their combined income is too high to qualify for those services.

Activists said they were also impressed to see that nearly every candidate supported expanding access to long-term, home, and community-based care, which allow people with disabilities to avoid institutionalization in nursing homes and other facilities.

Still, Biden’s proposals don’t go as far as some had hoped. Pulrang, one of the #CripTheVote founders, noted that both Warren and Sanders championed a single-payer health care system — which, he wrote, could have ensured people with disabilities that health care is “always there, impossible to lose, and not something you have to earn.”

“If we had seen Biden’s plan from any candidate in 2016, I think we would [have] been thrilled,” Beratan wrote. “But after seeing plans from candidates like Castro, Warren, Sanders and even Buttiegieg, that truly engaged our community. I can’t help but feel Biden’s plan is a step back.”

Still, experts said Biden’s platform lays out practical steps to put the plans into action if he is elected.

“The Biden plan is all things Joe Biden — it’s common sense,” Cokley said. “There’s a very strong enforcement theme through his plan. And I think if there’s anything that we’ve seen lacking in this administration, it has been enforcement of already existing civil rights.”

Advocates said any strong plan has to address the way disability intersects with racism, sexism, and other systemic issues.

“I need a nominee who is going to understand that we are not a monolith,” Mercius said. “My experience as a disabled Black woman is going to be different from the experience of white man.”

Wong, another of the #CripTheVote founders, wrote in an email to STAT that she hopes to see a platform that delves into the intersection between poverty and disability.

“I am concerned by how many disabled people are left behind the Covid relief packages as we face higher rates of unemployment,” Wong wrote. “Housing is another huge issue for disabled people, with the lack of accessible and affordable housing, and I hope to see eviction moratoriums across all cities and states to prevent even more hardship during this time.”

Biden has released a separate plan on supporting people with disabilities during the Covid-19 pandemic specifically.

“These chats are significant in that they are by us and for us in a public space where people can listen and learn,” she wrote. “It’s up to them to reach out!”