Home  |  Blog  |  They have chronic illnesses. Then, the power went out in Texas. ‘It’s been emotionally exhausting.’ 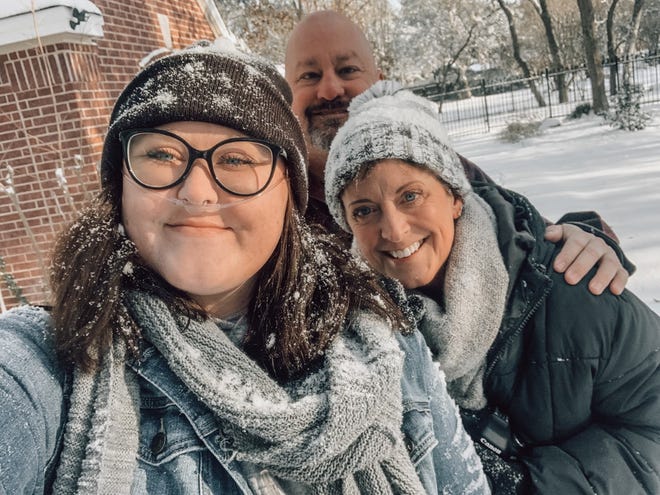 The 24-year-old who was recently diagnosed with four chronic illnesses relies on an oxygen concentrator to help her breathe, but when the power went out Tuesday in San Marco, Texas, she was forced to ration her oxygen.

“It’s been emotionally exhausting,” she said. “Not knowing if we’re going to have power to supply my ability to breathe is terrifying.”

No emergency services could refill her oxygen tanks, and because her lung disease puts her at high risk for COVID-19 going to the hospital wasn’t an option. Feeling isolated and hopeless, she and her mother, Kristin, turned to social media to try to get a generator or oxygen tanks from FEMA.

“My husband and I were just beside ourselves,” Kristin Giffin said. “We can’t sleep because we’re thinking about what happens to her if her oxygen runs out.”

Freezing temperatures and winter storms have caused widespread power outages across the country leaving people with disabilities and chronic illnesses scrambling to find ways to access life-saving medical supplies and charge devices they depend on.

For people with disabilities and chronic health conditions, losing power can “be a matter of life and death,” according to Jane Buchanan, acting director of the disability rights division at Human Rights Watch.

Earlier in the week, more than 4 million in Texas alone didn’t have electricity after large shares of the state’s power plants were kicked off its grid. More than 1 million people were without power Thursday, including more than 400,000 customers in Texas and widespread outages in Louisiana, Alabama, Mississippi, Kentucky and Oregon.

The winter weather has claimed as many as 36 lives  this week, some of whom died struggling to find warmth inside their homes.

Older people, people with chronic conditions and people with disabilities will likely be disproportionately impacted by the outages, advocates say.

“Losing electricity just exacerbates the inequalities that already exist for marginalized people, but specifically for those that are energy-dependent, transportation-dependent, healthcare-dependent,” Stephanie Duke, an attorney at Disability Rights Texas said. “It’s the mechanisms and processes we have in place that create more barriers.”

The disability community has a diverse set of needs that could be impacted by the loss of power and water. Electricity is needed to power medical devices like motorized wheelchair, CPAP machines and respirators. Poor weather can also prevent people from getting refills for essential medication and caretakers from reaching patients.

In Texas, while larger hospitals and facilities are fairing better, people who live alone or in smaller nursing homes and assisted living facilities are stuck without supplies, Duke said.

Duke, also a disaster resilience fellow at Equal Justice Works, said that Texas has seen huge demand for generators, oxygen and transportation to warming centers. If they have a serious medical need, people with disabilities may have to go to a hospital, which could come with unforeseen costs.

That was the case for Ashlynn Hoffner, 32, who was forced to call an ambulance after her the battery on her partner’s oxygen machine ran low.

KD Hoffner, 31, is chronically ill with heart and kidney problems requiring dialysis every few days and an oxygen concentrator to breathe. Their concentrator must be constantly plugged in and would only last a few hours on back up power after the electricity went out at 2:30 a.m. Monday.

Hoffner, who works for IBM, guided emergency service workers through her dark home in Richardson. The pair spent the next few days staying with friends and at a shelter and making long drives in icy conditions for dialysis appointments.

“I’m happy to have been able to keep them stable. That was very uncertain for the first day,” Ashlynn Hoffner said.

While the power is back on in their apartment, they don’t have water and Hoffner said they’ve received little help from the local government.

“I wont lie, it is very frustrating,” she said. “It feels like the government response to this has either been ambivalent or just outright hostile.”

Mila Clarke Buckley, a 31-year-old living with Type 1.5 Diabetes, also expressed frustration at the lack of communication from local authorities. Although she learned how to prepare for natural disasters like hurricanes while living in Houston, no one warned her of the severity of the winter storm.

If her insulin is not stored at a specific temperature, it must be used within 28 days. When she realized she would be without consistent power for days, she worried that much of her $1,200, 3-month supply would go to waste.

“That’s when I think I started to panic,” Buckley said. “It didn’t seem like there was any end in sight.”

To keep the medication cool she put it outside in an Amazon box with ice packs and a Bluetooth thermometer, normally used for grilling, and monitored the temperature remotely on her phone. Although her temporary fix worked, she’s worried about keeping it up as the temperatures change.

“There was a certain point I just want to give up,” she said.

The “massive” lack of preparation is a result of federal, state and local officials failing to engage with organizations led by people with disabilities, according to Germán Parodi, co-executive directors of the Partnership for Inclusive Disaster Strategies.

Parodi said the FEMA office responsible for the safety of Americans with disabilities has reduced its staff dramatically in the past five years, and local officials have failed to invite people with disabilities to the planning and response process.

“The disability community in Texas has been ignored,” he said.

The impact of the snowstorm on the disability community is not yet fully understood and more damage is likely in the coming days, Parodi said.

“We can stop another major disaster if people with disabilities are prioritized in the next couple of days,” he said.

For the Giffins, power is back on and if it goes out again a stranger from Austin has offered to deliver them a generator. Kristen Giffin said the outpouring of support from the community has been “overwhelming,” and she’s looking into starting a nonprofit to deliver generators to people who rely on oxygen concentrators.

“I think a lot of good is born out of tragedy,” she said. “We’re interested in making that happen now.”